Board games tend to have a reputation for being hard, requiring players who are exceptionally intelligent, calculative and particularly skilled or invested in the game. Of course, anyone who has ever extensively played board games in their youth will wholeheartedly disagree with that.

But the stigma behind board games even extends to today’s children: Hearing the word ‘board game’ possesses almost the same negative connotations among kids as ‘homework’ nowadays. Why is that, we wonder, when there are so many great, child-friendly board games out there that are real fun, not just for kids, but also us adults? Why not find out by taking a look at some of best board games for kids ourselves?

Top 5 Board Games for Kids Reviews

Jenga might not be the most orthodox of board games “after all, there isn’t even any real board to speak of” but it has earned its reputation as a great community game of both skill and luck in equal measure.

The concept is as simple as it is ingenious: Build a tower out of the now-famous Jenga bricks, only to take it apart piece by piece, each player taking turns trying to use the already assembled bricks to build the highest possible tower.

The player that messes up, causing the tower to lose its integrity and fall apart, loses.

Or you could just invent your own rules. In fact, the manual encourages just that!

Since watching a tall Jenga tower fall apart is just that satisfying, expect to see a lot of variations of the game revolve around just that.

No matter how you play it, though, Jenga is one versatile, fun board game for all ages that doesn’t need to fear comparison to any of the classics of yore. 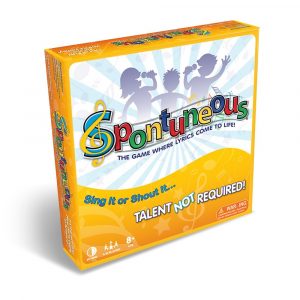 You may not have heard of Spontuneous before, but be assured, it is one heck of a game for the whole family.

The concept is very easy to understand.

All players share a playing field, shaped like a large treble clef, of course, and move along the board in turns.

There’s a so-called Tunesmith who writes down any number of words of their choice on a sheet of paper.

Every turn, they reveal one of their words, after which every remaining player has 15 seconds to sing at least 5 words of any song’s lyrics containing the ‘trigger’ word.

Only the players who manage to come up with a fitting song and perform it advance during that turn.

Of course, depending on the players’ musical knowledge, one round may last anywhere between a few minutes and half an hour, but either way, Spontuneous is meant to be played for many times on end.

It’s simple, it’s got replay value, it’s fun for all ages and it rewards you for your knowledge of pop culture.

What more could you ask for? From small children to adults, everyone seems to love Spontuneous, so don’t you think it could be worth a try? 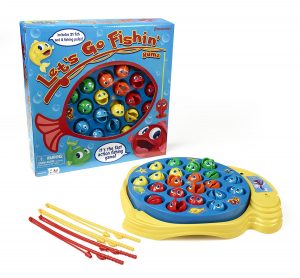 Let’s Go Fishin’ is a true classic, or at least, in its current form, a slightly revised version of one.

The aim of the game has remained the same throughout the ages, though.

It’s still a fast-paced game for two or more players where the participants race against time to try and catch as many fish as they can.

This is complicated not just by the cramped nature of the ‘pond’ and the flimsiness of the poles, but also by the fish themselves, who open and close their tiny mouths at seemingly random intervals.

Although one round barely lasts a minute or two, the game is known for its immense replay value and is loved by children around the world.

If you are looking for a kind of board game that can be played at any time, requiring barely any setup, and that can last as long as you want it to, then Let’s Go Fishin’ is just the right thing for you and your child, promising countless hours of fun. 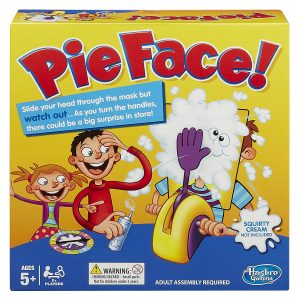 Pie Face!, a Hasbro game, is essentially a remake of a board game that has been sold at least since the mid-sixties.

They then have to sit on the ‘hotseat’, a contraption consisting of a frame to put their face inside of and two hand-operated cranks.

One cranks as many times as the number that they landed on on the wheel of fortune.

If the player’s particularly unlucky, the spring mechanism holding the mechanical hand back will release and launch its contents “whipped cream, a wet sponge, an actual pie, it’s up to you! “directly at their face.

If a player manages to crank 25 times in total without getting hit, they win.

Of course, this isn’t the kind of game you play to win.

In fact, much like Jenga, the sensation of losing at Pie Face! is so fun losing on purpose is perfectly understandable, not to mention pretty common.

Pie Face! may not be a game you’ll revisit often, and you do have to clean up after each and every round, but oh boy is it fun! Suitable for any ages, of course, and destined to get a smile on the faces of everyone involved. 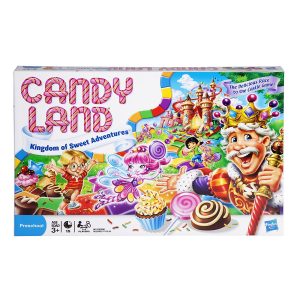 Candy Land is a true classic, a game that may be extremely childlike in design, but one that many adults would willingly play every now and then just due to the nostalgia associated with it.

Of course, this particular version, called Kingdom of Sweet Adventures, is rather new, but the basic rules of the game are just like seasoned players will remember them being, with the exception of a spinner replacing the traditional card deck.

Since the game requires no exceptional skill, not even significant reading or decision-making, instead mostly relying on luck, it is simple enough to recommend to even the youngest of kids, and it has the potential to be played with the whole family.

A true classic that many still remember fondly and a bestseller that continues to impress to this day, Candy Land should be a safe choice regarding a board game suitable for the younger ones among us.

So, you see now how board games can, given the right choice, be great fun for the whole family, not just us elders? That’s great! Instilling this view on your offspring can help to give them a whole new perspective on these games and hopefully get them to enjoy them as much as you or anyone else. Among our top picks are great classics, innovative newcomers and many things in between, but don’t shy away from trying something new entirely. Who knows, perhaps the world’s best family board game for you personally is hiding just around the corner?