On most days, parents tell at their kids to normally, go to bed early, and stay away from candy. Then, there’s Halloween where the complete opposite is encouraged. Kids who might be scared of monsters under the bed now revel at the sight of jack o lantern faces. With the jack o’ lantern as the most popular symbol of the season, here is a guide on these faces ideas.

Here is the step by step guide on how to make these faces.

Step 1: Decide on the medium

There are different kind of pumpkins in real life. There are Blue Hokkaido Pumpkins, Cheese Pumpkins, or Red Kuri Pumpkins. Each one of these pumpkins has their own unique characteristics.

Much like their real-life counterparts, a pumpkin can be drawn in a variety of ways. Think about the medium you are using.

If you are using a pen, pencil, or marker. Also, the paper can be different. The thickness of the paper can influence the overall look of your pumpkin drawing.

If you are confident in your skills, you can start by sketching a round shape that is slightly flattened out at the bottom. You can either draw it with a stem or draw the pumpkin like it has a hole on top.

Those who are unsure of their drawing skills are use grid lines as a guide for the proportions. You can draw several vertical and horizontal lines and then draw curved lines so that your pumpkin curves evenly.

For the face, you can draw three lines across the rounded pumpkin shape. These lines will divide the pumpkin into four sections.

Adding slightly curved lines to look like ribbing on the pumpkin will make it look more detailed.

Step 3: Choose the eyes and nose

Do you want your pumpkin to look scary or do you want it to look cute? Unlike the tests you had to take in school, there is no right answer. It all depends on what you want.

You can choose a simple triangle to use for the eye and nose design. Add depth by drawing another line where you would see the inside of the pumpkin. These are usually at the bottom and one side of the shape. These lines will make the drawing look three-dimensional.

The mouth will give the jack o’ lantern the bulk of its expression. Goofy-looking lanterns can have gapped teeth peeking out. You can also use a crescent shape to make a classic smiling jack o’ lantern.

If your idea is to give little children a thrill, downturned mouths with pointy teeth can be your go-to.

You can also experiment with other shapes like a zigzag to create the mouth. A circle can also book like the pumpkin is saying, “boo!”

Coloring the pumpkin is not just about filling in the whole drawing with orange. It is about adding texture through the use of shades and colors.

Start by lightly coloring in the pumpkin with the color of your choice, then color the portions closest to the circumference a little bit darker. You will see that the pumpkin will look a little less flat.

If you want to look like the inside of the pumpkin is lit up, color the eyes, nose, and mouth yellow. Remember the extra line you added to make the pumpkin look 3D? Color in that part a lighter orange to emphasize the depth further.

Another way to color in the pumpkin is by shading. Imagine that you are lighting up one side of the pumpkin with a flashlight. The parts where the light hits the pumpkin, leave them white. Shade the parts where you think the shadows will fall with a pencil.

There is also nothing wrong with an old-school, retro-style pumpkin. Color the outside of the pumpkin dark orange and the facial features black. It is simple, but still effective.

How to Make a Jack O Lantern Face Paint

If you already know how to draw a pumpkin on paper, nothing is stopping you from wearing your drawing like a badge of honor. How about some face painting to truly get into the Halloween spirit? It can also be a fun and cheap costume idea.

5 Jack O Lantern Ideas for You and Your Kids 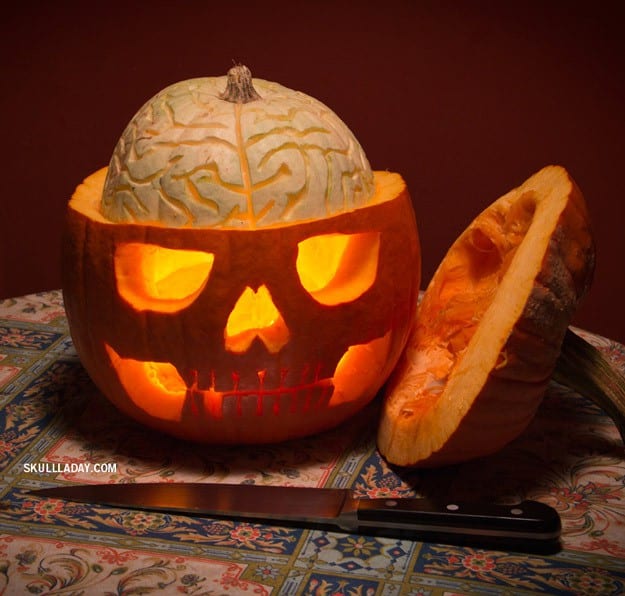 Get two pumpkins, with one smaller than the other. Carve out the larger pumpkin as you would any other jack o’ lantern. Make sure to hollow it out really well.

For the smaller pumpkin, carve out a brain pattern at the top portion. Hollow it out. Then, cut the front portion off. 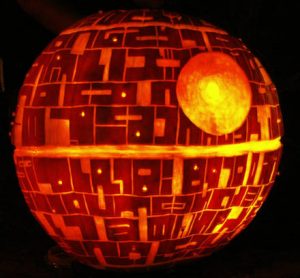 Who says that pumpkins have to be smiling or frowning faces? Use your imagination and carve out different designs. How about a Death Star pumpkin? An intergalactic superweapon is pretty scary too.

Clean out the pumpkin as you normally would. Then, carve a line in the middle of the pumpkin going all the way around. On one side, carve out a large circle, which will be for the laser.

Next, carve out thin horizontal lines around the pumpkin. Do not carve over the large circle and make sure they are evenly spaced. Next, make thin vertical lines in between the horizontal lines to create boxes.

Finally, add details by cleaning out the laser circle and carving designs on the box patterns. 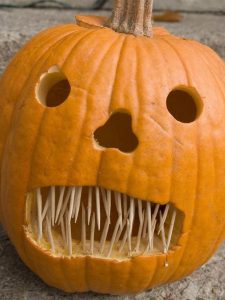 Another easy way to customize a lantern is by using toothpicks. Carve out the lantern and then stick in toothpicks in the mouth as teeth. The more toothpicks you use, the more menacing it looks. 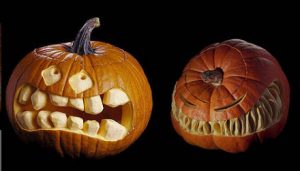 You can also emphasize the teeth when carving out the pumpkins to give your jack o lantern faces images more personality. Instead of cutting out the shape of the mouth completely, leave some of the meat of the pumpkin in. Carve the flesh of the pumpkin so they look like teeth. 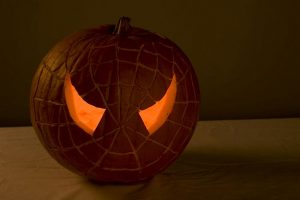 Pretty sure that even Peter Parker celebrated Halloween. Carve out a Spiderman pumpkin by cutting out horn-shaped eyes and then carving a web pattern on the pumpkin.

As you can see, there are many ways to add the jack o’ lantern into Halloween. It does not have to be the same kind of pumpkin every year. You can draw it, paint it on your face, or even make a superhero out of it.