The fascination that most people seem to have for magnets is indescribable. There is just something about that invisible, yet powerful force that scratches some itch that lingers inside of us, isn’t there? Children, being naturally fond of exploring the world around them, have great fun toying with magnets, too.  So much so that, over the years, many toys have been created that incorporate magnetism in some way. Let’s take a look of some of the best magnetic toys out there, shall we?

Here are the highly-rated magnetic toys for kids. 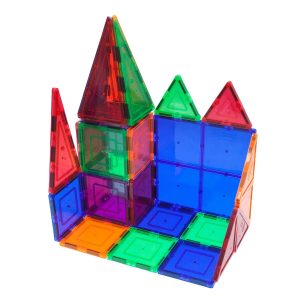 The Picasso Tiles consist of building pieces in the shapes of squares and triangles, held together by “surprise, surprise”small magnets, allowing young artists to create pretty much anything.

A magnet-based alternative to Legos, some would say. Just a small glance at some example pictures of the PicassoTiles shows how much is possible with them. From buildings to animals and abstract art, the possibilities seem endless.

A highly creative toy, the PicassoTiles come in packs of 60 pieces, but you can stack as many together as you want thanks to the magnetic linkage.

The benefits for your child’s cognitive development are both plentiful and obvious, and the fun that they’ll have can’t be put into numbers alone.

In fact, the Picasso TilesPicasso Tiles are not just for kids; they’re a hit among people of all ages. With a fair price tag of just $40 per 60 pieces, they’re affordable, too.

We would definitely recommend the PicassoTiles without any second thought, if just for their sheer creativity value. 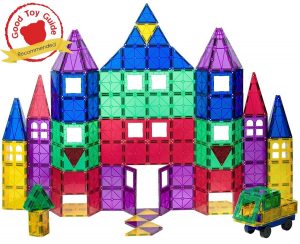 Whereas the PicassoTiles are a simple, but yet ingenious piece of kit, the Playmags Super Set takes the same concept to a wholly different level.

With 10 different kinds of blocks, among them multiple kinds of triangles, rectangles and squares of many sizes and shapes, much more interesting and complex shapes can be built.

The set also includes flat square-shaped pieces that can be mounted onto existing blocks, called ‘Clickins’.

These can be purely aesthetic, like Clickins windows, used to decorate other square-shaped blocks, or educational, like the Clickins ABC, a handy set of letters to help your child learn how to read and write in a playful fashion.

Additionally, the Playmags Super Set comes with a nice storage bag that easily fits all 100 pieces inside and an Idea Book, filled with countless designs and concepts that your child can base their next creation on.

The price of over $50 may seem steep, but two 60-piece sets of PicassoBlocks are both more expensive and less rich in content. So the Playmags still wins when it comes to the price-performance ratio. 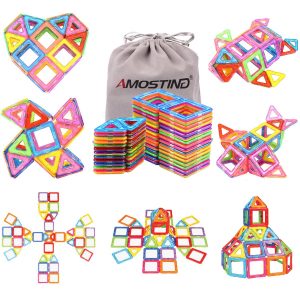 Similar to the PicassoTiles, the Magical Magnet Building Set includes 56 square- and triangle-shaped building pieces, held together by magnets.
Besides packing slightly less blocks in total, the two are almost indistinguishable; in fact, numerous buyers have reported success in using AMOSTING blocks and Picasso Tiles interchangeably to construct one object.

So, what reason is there to go for the Magical Magnet Building Set instead of the PicassoTiles in light of the (almost) equal price of $35?

Firstly, there’s the looks. AMOSTING blocks, in spite of being inter-compatible with the PicassoTiles and some others, sport a different design.

Whereas the competition uses basic geometric shapes with clean, flat and featureless surfaces, AMOSTING building pieces are actually hollow, featuring a gaping hole in the center.

What’s more, the AMOSTING set comes with a nice little booklet to help your kids understand how to start using them properly and a storage bag to store all the 56 pieces inside of. 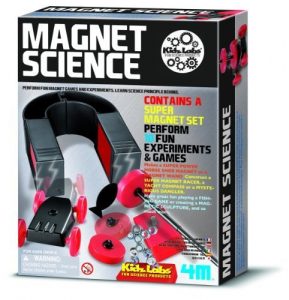 How about something different for a change? The 4M Magnet Science Kit is one of the more obviously educational toys on our list. But that doesn’t mean it can’t be a whole lot of fun for kids of nearly all ages.

What you get with this package are multiple kinds of magnets, both traditional horseshoe-shaped ones and some more specialized variants. As well as many pieces and tools to work with to create interesting scientific experiments.

For example, with the included plastic chassis, four wheels and some ingenuity, one can create a magnet-driven toy car! Many experiments are possibly with the Kit, and of course, you can come up with some of your own if you are particularly inventive.

Even though some may not see it as a toy in the traditional sense, the 4M Magnet Science Kit is one hell of a bargain: For $20.

You get a set that’s both highly educational, yet provides countless hours of fun and possesses great replay ability value, as creating new experiments is a game in and of itself. A definitive recommendation. 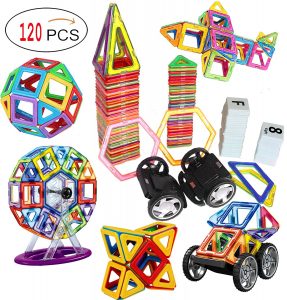 The Magnetic Tiles are something like a blend between the AMOSTING building blocks and the 4M Magnet Science Kit.

What you get in this package is a set of magnetic square-shaped and triangular building pieces as well as ‘Clickins’-style numbered and lettered blocks.

What sets this set apart from most, though, is the addition of physics-based parts, such as wheels to put on your construction.

A stand is also available, which, with an appropriately-designed object in place, can be used to make a carousel, a windmill-like structure or a ferris wheel. Some block shapes not seen on other sets make an appearance, too, like hexagons.

All in all, especially considering the low $28 price tag, the 96-piece Magnetic Tiles set is a great choice.

It combines educational value with the reliance on creativity inherent in other building block games such as the PicassoTiles.

Which of the above listed magnetic toy sets you choose depends entirely on you, of course. Our guide should serve as nothing but that, a simple listing of your possible options. Rest assured, though, that your child will have great fun with any of our first 5 contenders and that all of them are of the highest quality in their specific segment. The rest is up to you, your needs, your child’s preferences and so on. We wish you great luck with your purchase!