If you have children, there’s a high probability that they love watching animated television shows. It is also highly probable that your kid’s favorite animated TV show is the Paw Patrol. So, if you are getting them a gift, you can never go wrong with this category of toys.

As a parent, what’s not to love about them? The show helps build the character of kids while teaching them valuable lessons about leadership, teamwork, safety and problem-solving skills. That said, there are many variations of toys available on the market, so many, that choosing one can be a daunting task. In this review, we look at 10 of the very best variations of these toys, to make your life easier! Let’s start with the first one.

Here are the 10 most popular paw patrol toys.

The lookout tower is the mother of all Paw Patrol category toys. It stands at about two and a half feet tall and comes with different types of toys and accessories that children can play with.

The elevator and the slide fitted in the tower provide a fun-filled adventurous experience.

It allows toddlers to transport the pups from the ground level to the top level and back. The tower also features a vehicle launcher which rockets vehicles down the slide.

The lookout tower is fitted with various Paw Patrol soundtracks and lights that enhance the game’s adventurous ambiance.

By the simple press of the red button located on the top level tower, different sounds and lights come on, to recreate scenes from the Paw Patrol show. 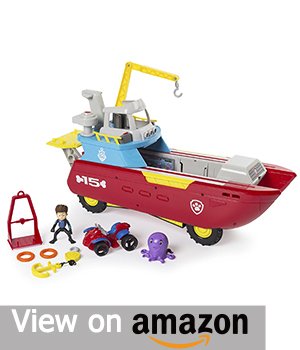 In the Paw Patrol realm, you never quite know where the sense of adventure will take you.

So whether the adventure takes you to land or sea, you need to be well-prepared and well-equipped.

That is where the sea patroller comes in. It is a hybrid vessel that can conquer both the land and sea.

Its design resembles that of a ship but comes equipped with drop down wheels attached at the bottom.

These wheels allow the sea patroller to transform from a sea conquering vessel to a land conquering vehicle which takes pups on exciting missions.

The possibilities never end with the sea patroller. It allows toddlers to carry smaller vehicles on board and dispatch them whenever trouble arises in Adventure Bay.

Beyond the deck of this vessel, you get a fully functional crane that lets the pups go on rescue missions.

The sea patroller also comes with the Ryder character and his ATV that you can lift out of tight spots using the crane.
Pros
Cons 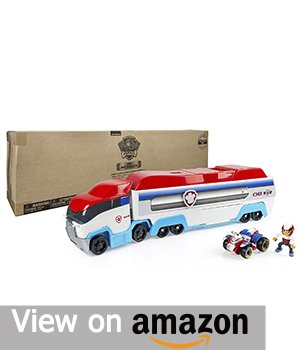 Some situations are so dire that they require an all hands on deck approach to come out on the other side unscathed.

Meet the paw patroller. The ultimate rescue vehicle in the Paw Patrol realm.

It is an extra-long vehicle that comes with a bunch of rescue features, a landing pad and a fully functional command center that houses six patrol vehicles.

As an additional feature, you also get Ryder and his rescue ATV with this paw patroller.

The paw patroller is shaped like a large trailer truck.

Another cool feature about the paw patroller is that it is fitted with a roof that completely opens up. This allows the pups easy access to the cabin when on adventures.

As if it couldn’t get any cooler, the paw patroller also comes equipped with all the soundtracks from the show for a more subversive game play. 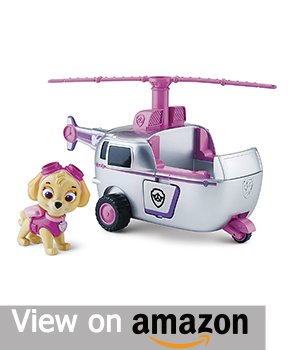 Are your kids ready for a sky-high adventure? Skye’s copter allows your kids to swoop in from above and save the day.

The copter is a handy tool to have in your kid’s Paw Patrol Empire seeing that it doubles as a chopper as well as a vehicle with fully functional wheels.

Skye’s Copter comes fitted with extendable wings and a propeller that spins.

Regarding design, Skye’s copter features an open top roof for easier access to the chopper.

And since it can only ferry one pup at a time, it presents your kids a golden chance to problem solve and work as a team.

They can call upon other Paw Patrol characters such as Zuma, Rubble, Rocky, etc. to come with their rescue vehicles for fun adventures and rescue missions.
Pros
Cons 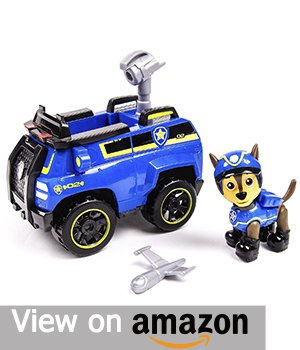 Fifth on our list is Chase’s spy cruiser. This spy cruiser has a similar design to that of an armored truck.

It sports large off-road tires, a large grille at the front and best of all, a periscope on the roof.

The periscope gives the pups a good view of the landscape which allows them to look for adventurous spots or damsels that need rescuing.

The spy cruiser’s body looks and feels sturdy, sort of like it is indestructible. In the realm of Paw Patrol, this vehicle belongs to Chase, and he alone can maximize its output.

The spy cruiser’s open top allows other pups to ride in it for rescue missions and adventures.

Kids can decide to bring along a few adventurous pups such as Skye, Marshall, Rubble and others on this spy cruiser on a mission to save Adventure Bay.

Chase’s spy cruiser fits in perfectly with other toys and gadgets from the Paw Patrol collection. 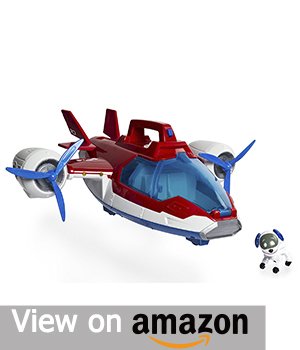 It can transform from a plane to a helicopter to allow the pups to swoop in on the action from miles away in the Paw Patrol world.

The cabin of this plane opens up and can carry two pups while the cargo bay area can carry four pups when going for complicated rescue missions and adventures.

The design of the air patroller plane is truly the perfect blend between a plane and helicopter.

Both sides of the wings are fitted with a propeller engine that rotates to propel the plane forward.

While in helicopter mode, the propeller engines turn to face upwards to provide a lifting force which allows the air patroller plane to hover above mission sites.

Also, when in helicopter mode, the air patroller plane can land on the paw patroller which has a helipad designed to accommodate this function.
Pros
Cons 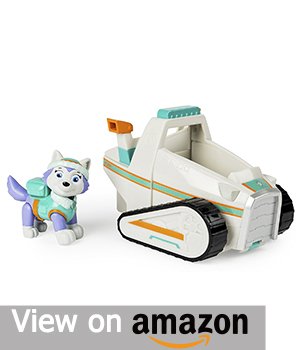 Just like the name suggests, Everest’s rescue snowmobile is designed to go on rescue missions in terrains filled with ice or snow.

But since it can only fit one pup at a time, it creates teamwork and problem-solving skills among kids.

This is where Everest can lead other pups and their vehicles in rescue missions across snowy terrain.

In terms of build, this snowmobile is fitted with a continuous track set of tires on either side, like you would find on a war tank.

These war tank-style tires combined with the moving claws mounted on the front makes this snowmobile ideal for plowing through obstacles, whether ice, snow or mud.

Everest’s rescue snowmobile features an open top design that allows easy access in and out of the mobile.
Pros
Cons 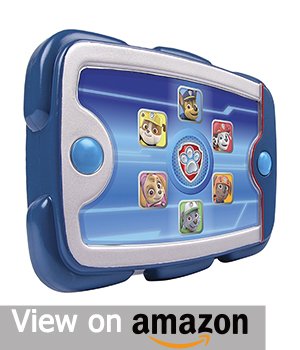 Ryder’s pup pad is a tablet-style device that gives kids control and access to all components of the Paw Patrol playset.

With this pad, your kid can call upon the entire paw patrol rescue team when emergency situations arise in Adventure Bay.

At the touch of a button, your kid can lead the paw patrol team on missions and adventures.

The pad displays all your favorite pups on the screen, whether it is Chase, Marshall, Rocky, Zuma, etc.

This makes it easier to summon your favorite character to join you in your adventures.

A cool feature is that you get to hear your character’s special phrase when you select their profile.

This is because all the 15 characters have their unique Paw Patrol phrases and sounds. 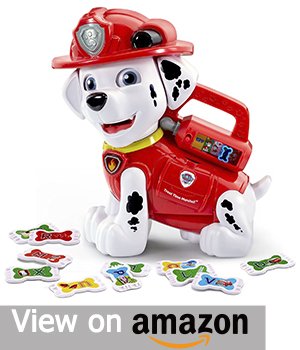 Unlike the other toys and gadgets on our list, the treat time marshal is produced by a company called VTech and provides different functions.

As for the other toys, they are made by Nickelodeon and are designed to mimic the Paw Patrol show in Adventure Bay.

And while the treat time marshal still belongs to the Paw Patrol family, he is designed to help kids learn alphabets.

The treat time marshal toy comes with 26 bone-shaped treats that have letters, objects, and phonics engraved in them.

Whenever you feed the marshal a treat, he instantly recognizes the letters or object engraved in the treat and plays it back for you.

His ears and eyes are programmed to dance during the playback, which is a cool feature for kids. That said, treat time marshal’s functions are not only limited to learning, you can take him on missions and adventures with the other members of the Paw Patrol. 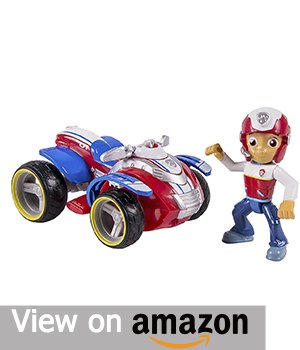 Everyone who is familiar with the Paw Patrol show knows that Ryder plays a critical part in the show.

He assumes the role of a heroic team leader and a teacher, a trend that continues with the toy version of Paw Patrol.

This toy features Ryder and his rescue ATV. The ATV comes fitted with four functional tires.

This means you can lead or join other pups on rescue missions as they follow you in their vehicles and aircraft.

Unlike other Paw Patrol vehicles, Ryder’s ATV can only be driven by Ryder. This is because Ryder has been fixed on the ATV.

His hands are formed in a c-shape that attach safely to the ATV’s handlebars to hold him in place while on rescue missions.

Other toys lack this feature which is a shame because they keep falling out of their vehicles when on missions.
Pros
Cons

Despite being a little more expensive than the other toys on our list, the lookout tower is the best toy you can buy for your child.

Thanks to its sheer size, its design layout and the variety of components and gadgets it comes with, the lookout tower provides a range of experiences and possibilities that other toys cannot match.

The endless possibilities on offer mean your kid will never get bored of this toy. What’s more, the lookout tower has that “wow” factor.

Even as a parent buying this toy for your kid, you’ll be surprised by its sheer complexity and the endless possibilities it provides. As mentioned earlier in the review, the Lookout tower is the mother of all Paw Patrol’s toys.

It is compatible with all toys, and some of its standout features like the periscope, the elevator, the slide and the vehicle launcher make it a wonderful gift for kids.

There you have it folks. 10 best Paw Patrol toys you can gift your kid. We dove deep into the Paw Patrol realm and broke down their products to provide you with a list of 10 of our favorite toys. We’re fully aware that picking the right gift is critical.

It would be a complete disaster if you bought your child a gift he/she never uses. But with this list, you are safe to pick any toy, and your child will love it. That said, we’re leaning towards the lookout tower because we believe it is the best & most versatile option.