Remote controlled cars for kids just seem to never, ever get old. They’re one of the quintessential young boy’s toys, though girls enjoying them aren’t unheard of, either. Their appeal is never-ending, and that’s a great thing for parents as it makes them a nearly universal choice for a gift.

Still, this begs the question: how are you supposed to pick the best one? After all, with a market this old and big, options are nearly limitless. You don’t need to worry, however. We have tested and compared the best R/C cars and toys there are and listed them here for your convenience. Don’t forget to thank us later. 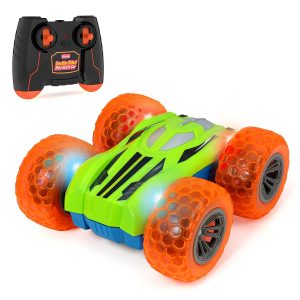 Double-sided R/C cars are a novel concept. It eliminates the risk of tipping over by allowing the toy to drive without problems on either side.

This toy car by KidzLane is a great example of this design, featuring large wheels, two differently-colored sides and a neat controller that, thanks to a distinctly low number of buttons, instead featuring two control levers, is very easy to use.

The car takes 4 AAA batteries to work, and the controller itself needs 2 AAs, as well. They use them up in about 20 minutes straight.

Granted, this makes the KidzLane R/C car not the most energy-efficient one on the planet, but the fun that it provides when used does more than just make up for this deficit.

Since it can reach a top speed of roughly 5 mph, or 6.5 kph, it’s reasonably quick for such a small toy car, and the range of 100 ft, or 30 meters, is pretty impressive. 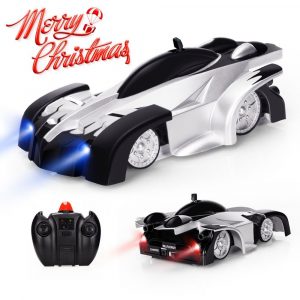 The EpochAir Wall Climber does just what its name implies. It can drive on walls and even the ceiling just like a normal R/C would on the floor. It does this via a vacuum-inducing suction are on the bottom, which will engage if the car is set into ‘Wall’ mode.

For normal use, it can be switched back to ‘Floor’ mode, where it’ll behave just like a normal remote-controlled toy car. A very good one, we might add.

Driving it is fantastic, even though the bundled controller is a little more complicated than most. Sure, you’ve got your two joysticks, one for moving forwards and backwards, one for turning left and right, but besides those, there are numerous buttons for trimming and various other settings.

To some children, that could seem a little daunting, if not overwhelming. Once you get past that, though, the WallClimber is a blast.

It’s everything a good R/C car needs to be: Fast, reliable, responsive and agile. The LED lights are also a nice bonus, telling the driver which direction the car is going.

Charging the WallClimber up is a lot more convenient than on other models thanks to a USB charging option instead of the traditional AA or AAA batteries. This makes the relatively low 15 minutes of average driving time easier to swallow.

All in all, the WallClimber is a great concept that happens to work almost perfectly in practice. So perhaps some will find $30 to be a bit much for a toy car, but for one of the best out there? We think it’s a fair deal. 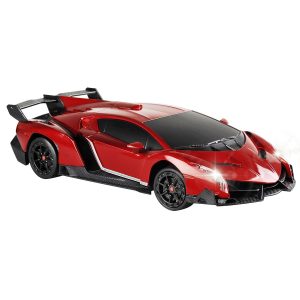 This is an R/C car of a different kind, being designed as a scale replica of an actual, real car model, in this case the Lamborghini Veneno supercar.

For children interested in real cars at a young age, this is a great present. Its performance is pretty standard fare, though it does have its high points.

For example, we found the controller simple, easy to use and its joysticks very responsive, even if the whole design is pretty standard. Furthermore, the QUN FENG packs two pairs of LED lights, one that lights up when the car is backing up and one that goes on when it’s driving forwards.

It’s less intricate than the system used in the WallClimber, which could also differentiate between left and right turns, but it looks cool nonetheless.

Like its real-life counterpart, it is almost unreasonably quick at a top speed of 10 mph, or 16 kph, and it’s very agile, too, cornering like few other R/C cars on the market. The high range of up to 40 meters is impressive, too.

The reliance on batteries, the small size’”this is a 1/24 scale model, after all’”and the fact that the QUN FENG drives poorly on anything but a perfectly flat surface are a bummer, though. 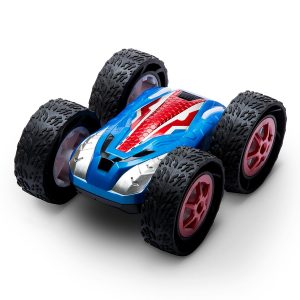 The Cyclone R/C car is another double-sided affair, but this one is special.

The radio controller, too, is a lot more rugged-looking than what you see on other R/C cars of comparable price and type.

It all gives off a strong off-road vibe, but can it live up to that image? Quick answer: Yes.

Though many wouldn’t believe it before they see it, the Cyclone is indeed very off-road capable for a medium-sized toy car and will prove its worth in snow, dirt, sand and thick carpeting.

The double-sided design only helps with this.

Add to that dual rechargeable batteries, powered by a USB cable, thank goodness, and the ‘Cyclone Mode’, a button that enables going sideways akin to drifting, and a great build, and what you’ve got is one great remote-controlled toy car. 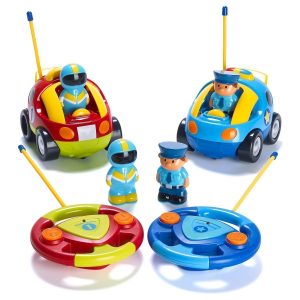 For the younger ones among us’”and those who like to play together, or perhaps against each other’”there’s the Prextex Pack.

This set of two cute, cartoon-inspired toy cars and steering-wheel like controllers is perfect for a pair of siblings, or just any two kids who want to challenge one another to a race.

There are four little figurines included, which can be sat in the car and make noises if pressed on. The cars themselves also have a few pressure-sensitive zones that can play some sounds as well as LED lighting.

Each car requires 5 AA batteries, 3 for the car and 2 for the controller. It makes the Prextexes not really that optimal in terms of power efficiency. Unless you always have 10 or more AAs lying around, that is.

The cars’ performance befits their cartoony looks, with great maneuverability but poor range and speed. Not so much that the kids will be disappointed with any of it, of course.

All in all, the Prextex Pack is great for younger children, mainly of the ages of 8 and below.

You get two good R/C cars and four cute figures for your kids to play with for only $30, and the cute looks alone can win anyone’s heart over, whether young or old.

So, which R/C car will you pick? It’s all up to you, of course. Our top 5 are a diverse bunch, both large and small, both for younger and older children, both fast and slow, innovative and derivative. You, and only you, can decide which would suit your child best, and with that, we’ll leave that decision to you. Good luck with your purchase!