There are a lot of factors that need to be considered in the single vs double bevel miter saw match-up if you want to pick the right one for your workshop.

We’ll discuss all of those and even highlight some miter saws in this article.

What Is a Bevel Cut?

Before we take a closer look at the single bevel vs double bevel miter saw comparison, let’s first clearly define what a bevel cut is.

Bevel cuts also approach the wood from an angle, but they don’t cut along the length of the piece. Instead, they go through the thickness of the material.

To make a strictly bevel cut, the angle of the table also has to be set to zero. If both the table and bevel are set to anything aside from zero, you’re creating a compound cut.

This video from Lowe’s demonstrates how to make a bevel cut.

It’s not hard to answer the question of what is a bevel cut. Pulling one off is also quite easy.

What Is a Single Bevel Miter Saw?

In a single bevel miter saw, the saw blade can only be tilted to one side. You may be able to find single bevel saws that can swivel to one of two directions, but most of them will be capable of tilting to the left.

When using a single bevel miter saw, you will have to turn the piece of wood you’re cutting over if you need to cut its other side. 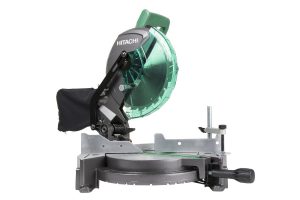 Since we are talking about bevel miter saws here, let’s start by discussing the range provided to you by Hitachi’s C10FCG Single Bevel Compound Miter Saw.

Bevel range for this saw goes from zero all the way up to 45 degrees. Thumb actuated positive stops make it easier for you to lock your desired angle into place once you get to it.

To also make the cutting process easier, you can place your work-piece on the table and then secure it using the provided clamps. You won’t have to hold on to the work-piece anymore with those clamps engaged.

Power is not in limited supply as this miter saw comes equipped with a 15-amp motor.

You can obviously do more than just create bevel cuts with this miter saw. For miter cuts, this saw’s table can be moved up to 52 degrees in either direction.

Compound cuts are similarly possible with this saw.

Most miter saws come with guide lasers and this one does as well. However, the laser can be difficult to see and it may not offer that much help.

Still, if you’re thinking of going with the first option in the single vs dual bevel miter saw battle, this is a fine variant to select.

What Is a Double Bevel Miter Saw?

While you’re in the middle of cutting, you can first tilt the saw blade to the left to complete one side and then just move the blade to the right to finish the whole piece. You no longer have to turn the piece over.

Let’s now look at a particular double bevel miter saw that you can get right now. 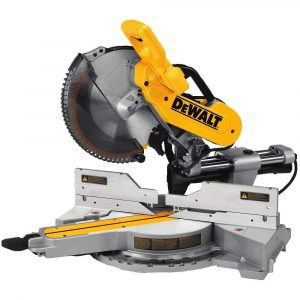 Similar to the single bevel miter saw we reviewed above, the blade on the DWS779 Sliding Compound Miter Saw from DeWALT can also be tilted up to 45 degrees to one side. The difference of course is that you can tilt the saw blade either to the left or the right depending on what you need for your specific work-piece.

You’ll also notice that the bevel scale has been made significantly larger on this miter saw. Thanks to that design change, making adjustments on the bevel angle should be easier.

The double bevel is not the only notable feature of this miter saw though.

It also has a tall fence that you can use for no-fuss cutting. You can use this for cutting through the larger pieces of lumber.

One thing that is missing from this miter saw is a laser guide, and that can make cutting harder for inexperienced workers.

Even so, this DeWALT creation is a fine example of why many folks go with the latter option in the single bevel vs dual bevel miter saw battle.

For a more detailed breakdown of how the single bevel and double bevel miter saws vary from one another, please check out the list included below.

Single vs Dual Bevel Miter Saw: Which One Do You Need?

The reality is that single bevel miter saws are fully capable of covering all your needs in the workshop.

Whether you need crosscuts, miter cuts, bevel cuts, or even compound cuts, a good single bevel compound miter saw can provide you with all of those.

Considering the price difference between the two variants, it may even make more sense for you to purchase the single bevel miter saw.

However, if you know that you will have to work with plenty of materials over the course of your next project and that you need to work quickly, going with double bevel miter saw could very well be the wiser move.

Did you like this article detailing the similarities and differences between the single and double bevel miter saws?

In most cases, you should be able to work fine even if you only have a single bevel miter saw, but it’s hard to deny the appeal of the convenience that can be offered only by the double bevel miter saw.

Please don’t hesitate to share your thoughts below and don’t shy away as well from sharing this article with others who may be trying to figure out if they need a single or double bevel miter saw.